skip to main | skip to sidebar

Trail Report - NV to Hammett
I biked from the NV border to the Snake River bridge by Hammett over the Memorial Day weekend. Roads are in reasonable shape, though that means they are very rocky and pocked with cattle tracks, and I averaged about 7-8 mph until I got up on top of the canyon above Winter Camp.

I ran into two sets of hikers. One set was hiking from Winter Camp to north of Hammett. Nice young couple just getting a section in.

The other is a thru-hiker team. One guy is named Dan and he and his wife started off at the NV border. She hiked with him to Hammett and then went home, but he was joined by two other guys, one of which is hiking the rest of the ICT with Dan. They hope to have it conquered by middle of July.  I asked if they knew anything about this blog, which they didn't. I encouraged them to come here and update it so Leo can at least try to track how many hikers the ICT is seeing every year.

On that note, Dan mentioned that there was another set of 3-4 hikers in front of them that were planning on a thru-hike.
Posted by Unknown at 12:32 PM

If you'd like to contribute to the ICT blog, please send Leo Hennessy an email at idmtnguy@aol.com and he'll add you to the list of authors. We encourage submissions to the blog so people can hear about your trips and see your photos and video. 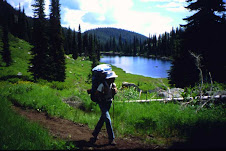